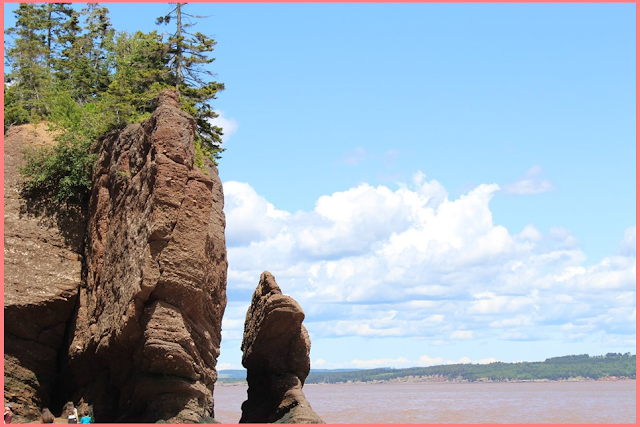 Vacations are good for the soul. Perhaps that is why travel is such an important part of my life. It excites, thrills, and renews. Recently, my husband and I checked an item off of our travel bucket lists: explore Eastern Canada. Ever since I was a little girl, I have dreamed of visiting Prince Edward Island. (I've been a fan of Anne of Green Gables for as long as I can remember.) So when my husband suggested a vacation within our own country rather than jetting off elsewhere, PEI was at the top of my list. Luckily, we were able to spend time in PEI, Moncton, Fredericton, and Nova Scotia. Here are some photos and travel highlights from our latest adventure.


Heading to Moncton and Day One Activities 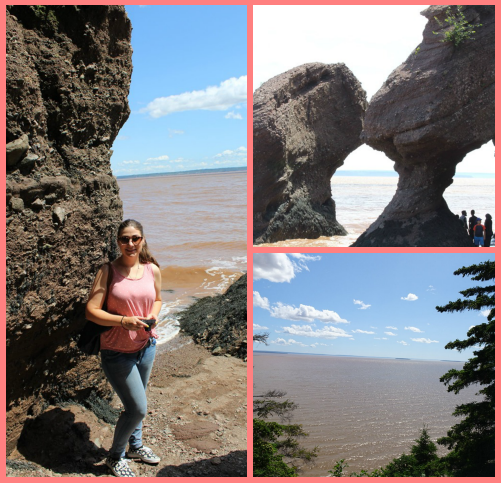 I'll be honest: I hadn't explored too much of my own country. It's often cheaper and easier to visit places in the United States. Plus, there is always the lure of Disney theme parks. That being said, my husband and I have visited Ottawa a few times in the past and absolutely loved it there. So, it was exciting to think about seeing other parts of Canada as well. Our trip started very early, with the alarm clock ringing at 4:30 am. Our flight was leaving at 8, so we had to get ready, drive to the airport, and go through security. It seemed like a lot of work for a flight that would last a couple of hours...but the alternative was a fifteen hour drive. After a somewhat frustrating experience at the airport, we took a very small airplane to Moncton.

After we arrived, it was a short cab ride to the hotel and then a quick walk to the nearby car rental place. We picked up our rental car and immediately drove forty minutes to Hopewell Rocks. Since it was New Brunswick Day on the day we arrived, admission was free! My husband and I spent a few hours hiking, walking through trails, and seeing the Hopewell Rocks as the tide was coming in. After that, we made a stop off at a random railway museum we passed as well as a spot loaded with old oddities. It was a fun - and action packed - first day. 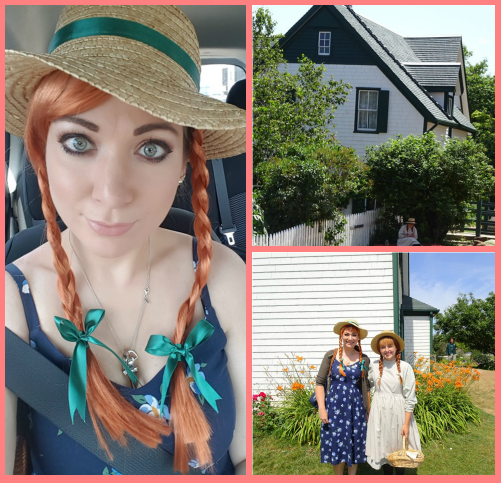 It was another early day...but there was so much to see and do. We started off by driving to The Giant Lobster (yes, it is really called that, and yes, it really is a giant fake lobster) to take pictures and look at the shops. Then we began our long drive to Prince Edward Island. There were a few stops along the way to check out a cute boardwalk we stumbled upon and to grab some lunch. Finally, we were crossing the bridge to PEI and my heart was racing. Finally, after all of these years, I was about to see Green Gables. Before entering Green Gables, I purchased an Anne hat. It was a straw hat with red bangs and red braids coming down the sides. So I put on my hat and got ready to cross something off of my travel bucket list.

We listened to the short guided tour, walked through the house, took pictures, and even met "Anne" herself. Then we hiked through The Haunted Woods and Lover's Lane and went to check out the property where Lucy Maude Montgomery used to live and attend school. We also stopped in the cafe to purchase some real raspberry cordial. It was served in bottles with an Anne drawing on the side. All in all, it was pretty spectacular. After that, we toured Lucy Maude Montgomery's birth house, went to the Anne of Green Gables museum (and saw the Lake of Shining Waters), and drove into Charlottetown. Before I knew it, we had to start the drive back to our hotel. This was by far my favourite day on the trip. 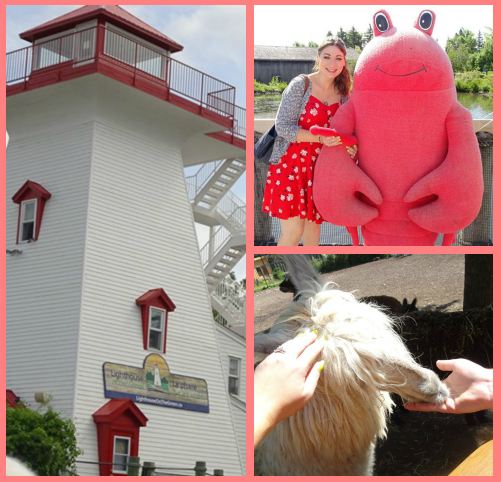 The next day we went to the Magnetic Hill area of Moncton. This is where you drive down a hill and you are "magnetically" pulled back up the hill while the car is in neutral. It was really cool. We wanted to do it more than once but it cost $6 per ride down the hill. After that, we looked at some of the shops there and then went to the Magnetic Hill Zoo. There were lots of animals and the zoo was really fun. I only wish it had been bigger. (I suppose I've been spoiled, living so close to the Toronto Zoo, which is absolutely massive.) All in all, it was a lot of fun.

Afterwards, we drove to Fredericton. It wasn't quite what we expected (smaller, for sure) but we were able to do some touristy things around there. That included a walk up a lighthouse and a tour of a smaller local museum. After that, we drove back to the hotel and relaxed a bit before the next days adventures. 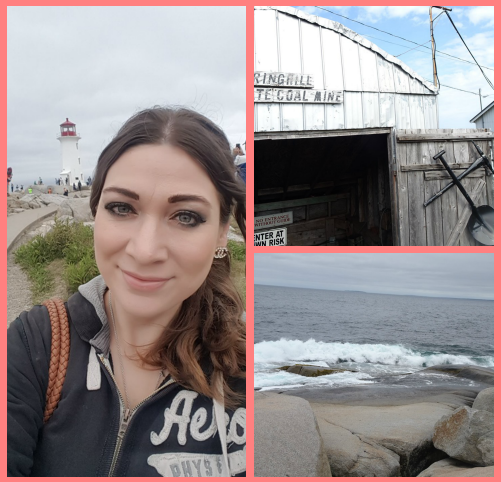 Next up? Nova Scotia. This was a really long day with more than four hours of driving each way. So we had an early start and made a few stops along the way. The first stop was at a mining museum. My husband enjoyed it but quite frankly, I hated it. Not because it wasn't interesting...but because they actually took you 300 feet down into an old mine. It was wet and the ceilings were low and the floors slanted so far down. I was totally scared and claustrophobic! Thankfully, after that, we drove out to Peggy's Cove, which I really enjoyed.

It was very far away but the views were incredible. The rocks, the lighthouse, and the waves...it was remarkable. We spent a while wandering and taking pictures. Though we were there for quite a while, part of me wished we could stay even longer. I loved listening to the sounds of the waves and watching the water hit the rocks. It was memorizing. Afterward, we had a very very long drive back to Moncton, grabbed some dinner, and hit the hay.

Back to the Hopewell Rocks 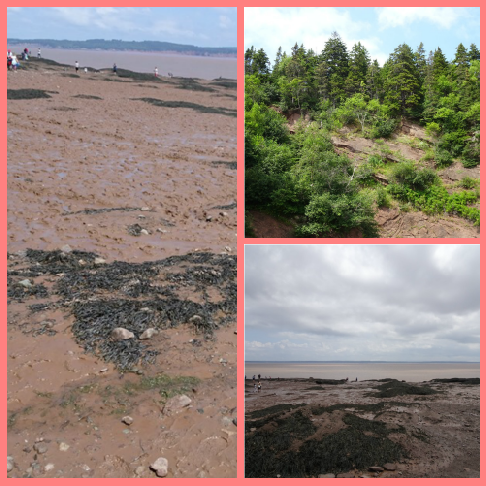 For our last full day, we went back to the Hopewell Rocks. The first time we went, the tide was in and we couldn't walk around too much. This time, we went back during the lowest tide so we could spend lots of time "walking on the ocean floor." And we certainly did! We walked really far out and did some of the hiking trails as well. After the visit, we went back to the hotel, walked by the river, and relaxed for our last evening of the trip.

Sadly, the next day we were headed home. And it was an absolute nightmare. Without getting into all the details...our flight was delayed. Then we got on the actual plane and sat on the tarmac for three hours, had to deboard, wait in the airport for a few more hours, and then get back on the plane. By the time we got home, we were both exhausted and emotionally spent. Thankfully, it was a wonderful trip overall. So I am trying not to focus too much on the last part!

It was truly a memorable vacation. One neither of us will soon forget. It was incredible to see all of the natural beauty our country has to offer...and just as incredible to make some childhood wishes come true. This was without a doubt, an unforgettable summer highlight.