come and take a walk on the wild side, let me kiss you hard in the pouring rain. 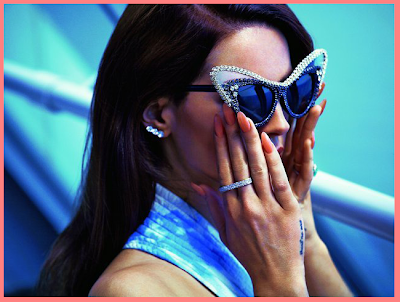 Lana Del Rey is the cover girl for this months issue of S Moda magazine. When I first saw the images, I was completely struck by the bold, retro styling. She has such a uniquely interesting fashion sense that truly came to life in these photos. Here are a few of my favourites.
Read more »
Posted by the creation of beauty is art. at 11:00 AM 30 comments:

love it or leave it? 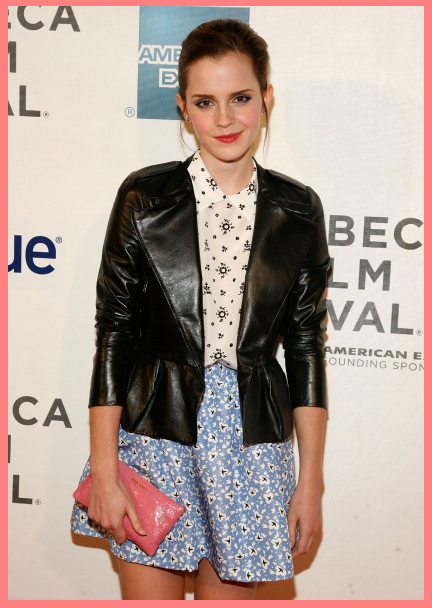 Emma Watson is such an amazing red carpet presence. She is never afraid to be bold! She brought this fearlessness to the Tribeca Film Festival premiere of Struck By Lightning.

With daring makeup - bright pink cheeks and a red lip, mixed prints, a fitted leather jacket, a pink purse and blue shoes, there is an awful lot going on with this red carpet look.

Email ThisBlogThis!Share to TwitterShare to FacebookShare to Pinterest
Labels: fashion, love it or leave it 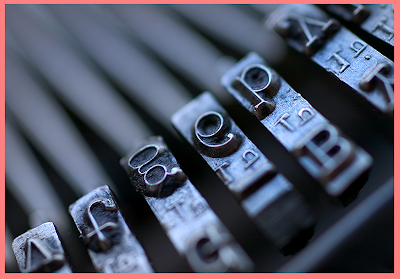 I was recently tagged to do the 11 Questions Q&A, by Elisabeth at the wonderful Dragonfly Blog! So, without further ado - here goes!

a life without love is like a year without summer. 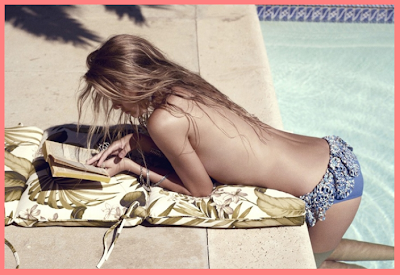 I am getting anxious for warm weather. Thus far, Spring has been cold and rainy. I spend my days longing for the sun instead! Which is why, when I was seeking inspiration, I found myself inspired by anything and everything summer!
Read more »
Posted by the creation of beauty is art. at 10:00 AM 40 comments:

a positive attitude may not solve all your problems, but it will annoy enough people to make it worth the effort. 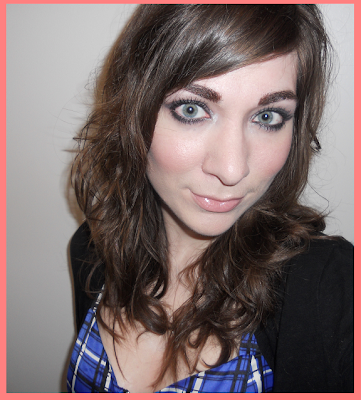 It seems that things never quite go as planned. And even when you think your backup plan is figured out...something happens to shake things up once again.

I suppose it is this kind of unpredictability that makes life what it is. As someone who likes things meticulously planned out, I often struggle with nights like this! Everything turned out well, though - I learned how to play pool...and realized I am quite terrible at it! Ah well, practice makes perfect.

For my makeup look last night, I went with slightly dramatic eyes in shades of deep purples, a plum coloured blush, and a nude lip.

saturday is a day for the spa. relax, indulge, enjoy, and love yourself, too. 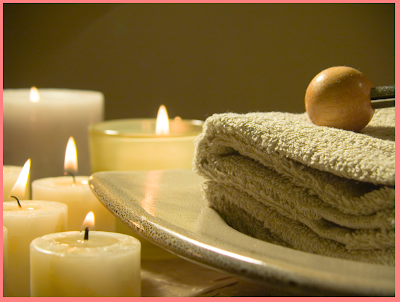 Okay, so technically it is Friday, but the quote still rings true! Every once and a while, it's important to take some time out and pamper yourself. Which is why I decided to do just that. Some relaxing music, an at home facial, and a pedicure. Nothing fancy, but just enough to re-focus myself.

Email ThisBlogThis!Share to TwitterShare to FacebookShare to Pinterest
Labels: nail, other, skin

i put my new shoes on and suddenly everything's right.

I own a lot of shoes. More than I care to confess to. Surprisingly, however, I only own one pair of sandals! My shoe obsessed self used this as an excuse to buy a gorgeous new pair!

What initially struck me about these sandals, were the gorgeous colours! I love the details around the ankle as well - there are gold chains, beading, and flowers everywhere! They are so beautiful and fun! 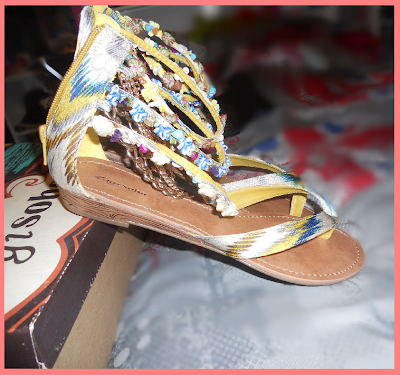 What do you think of these?

the last time i saw Paris, her heart was warm and gay. 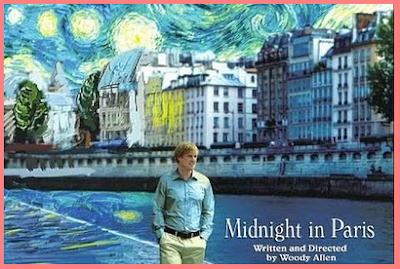 Midnight In Paris is a remarkable film. On the surface, this movie is a story about love and romance. It focuses on an engaged couple and their differing views. Gil (Owen Wilson) wants to give up his successful Hollywood writing career to write novels. He also wants to move to Paris after his marriage to Inez (Rachel McAdams). The film shows the unraveling of their relationship, as well as Gil's own personal growth.

I recently had the privilege of watching this movie, and haven't been able to stop thinking about it since.

Email ThisBlogThis!Share to TwitterShare to FacebookShare to Pinterest
Labels: movie, other

beneath the makeup and behind the smile i am just a girl who wishes for the world. 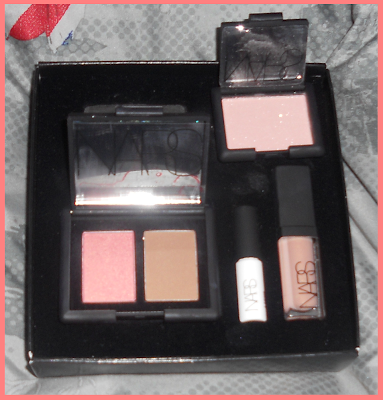 Trying new makeup is a truly exciting thing....and shopping for new makeup is a dangerous one! I tend to forget about what I actually need and how much I'm spending - the thrill of it overtakes me!

Which is exactly how I ended up buying the NARS Wicked Attraction set the last time I was at Sephora. NARS is easily my favourite makeup brand. I love the quality of their products, especially the blushes and bronzers! I simply could not resist!

i have always wanted my colours to sing. 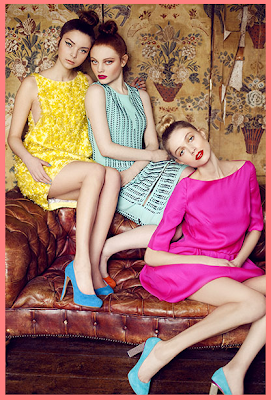 Despite the chill in the air, it is in fact Spring! With the (hopeful) arrival of warmer weather, bold colours are everywhere. One of the trends I am loving the most, has to be colour! Bold pops of colour, from clothing to accessories, is a fun way to add personality to an outfit.

Recently, I have added a few pieces to my wardrobe that I hope will bring that fun, bold, dynamic sensibility to my outfits. Everything is from Forever 21 - one of my favourite stores. One of the reasons I love that store, is that you can pick up cute, trendy pieces without breaking the bank.

sometimes, when one person is missing, the whole world seems depopulated. 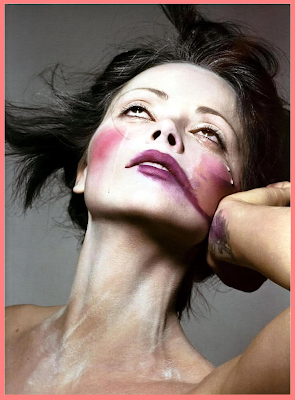 The last few days, I haven't been myself. I can't seem to shake this empty feeling, despite all logical reassurances. In an attempt to shake myself out of it, I spent time seeking inspiration. Here are some of the images that spoke to me today.
Read more »
Posted by the creation of beauty is art. at 9:00 AM 29 comments:

easter spells out beauty, the rare beauty of new life. 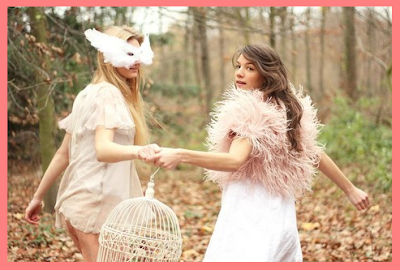 The last week has been a complete whirlwind. Between interviewing my favourite singer, Scott MacIntyre, meeting Hanson, my favourite band, working, and spending as much time with my boyfriend as possible before he leaves for vacation, I haven't had a spare second!

I wanted to take this opportunity to thank each and every one of you for being so incredibly supportive about my interview with Scott. Your kind words have meant so much to me. If you haven't read the article yet, you can do so here!

However you celebrate Easter, I hope you have a fantastic day with your loved ones.

Email ThisBlogThis!Share to TwitterShare to FacebookShare to Pinterest
Labels: music, other, personal

LEAP OF FAITH: My Interview With Scott MacIntyre 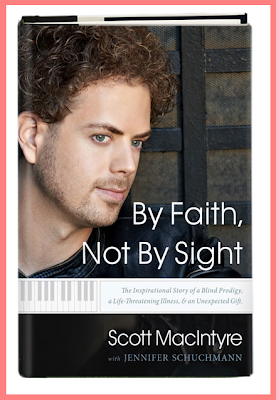 It was unfathomable…he was talking to me.

“I figured it out right before the call, so you’re stuck,” the voice on the other end of the phone chuckled warmly.

Twitter was my downfall. Or maybe it was Facebook that had given me away. Or perhaps it came down to those Christmas cards I sent. However it happened, my favourite singer knew who I was.

On the cusp of evening, I sat at my dining room table, clutching the telephone with a shaking hand. I was speaking to American Idol season eight finalist, Scott MacIntyre.

A long-time fan of the show, Scott redefined my obsession. Almost immediately, he became an integral part of my life. Idol concert dates, Tweets, and excessive Last.fm play counts have defined the last three years of my life.

This week marks the release of Scott’s inspirational biography, By Faith, Not By Sight. The book follows Scott’s life story, tackling a number of subjects, such as growing up with a visual impairment, his early foray in music, his impressive educational accomplishments, going through kidney failure and a successful kidney transplant, as well as his life during, and post-American Idol.

Earlier this week, I had the honour of speaking with Scott about the release of By Faith, Not By Sight, his music, and living his dreams.

we were always dreaming of how it was going to be. 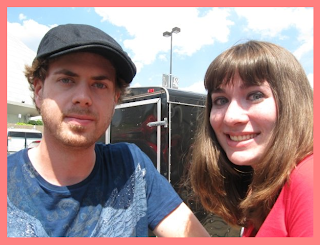 Sometimes there are moments you know you will remember for the rest of your life - significant memories that stand out, long after they have happened.

Today I had one of those moments.

I had the absolute privilege of interviewing American Idol Season 8 Finalist, Scott MacIntyre. Without question, it was the most incredible experience of my life. Being able to talk to him about his life and career was an honour I cannot fully express.

I cannot wait to share the interview with you all.