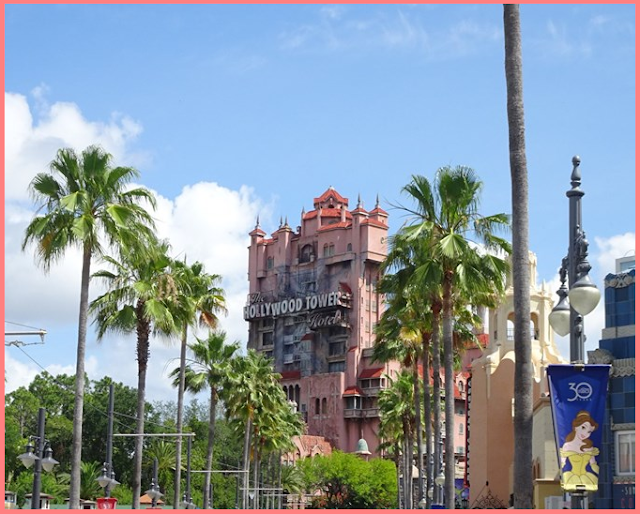 I miss it already. My heart longs to return to the wonder and magic that is Walt Disney World. Writing these blogs posts is a little bittersweet for me. On one hand, I love looking back and remembering all of the wonderful experiences...but boy, do I want to be there right now! My last post featured of the best bits from the first half of my vacation. Today, I'll be sharing some more travel memories. From Hollywood Studios to Animal Kingdom and of course, Magic Kingdom, here are some more Walt Disney World highlights. 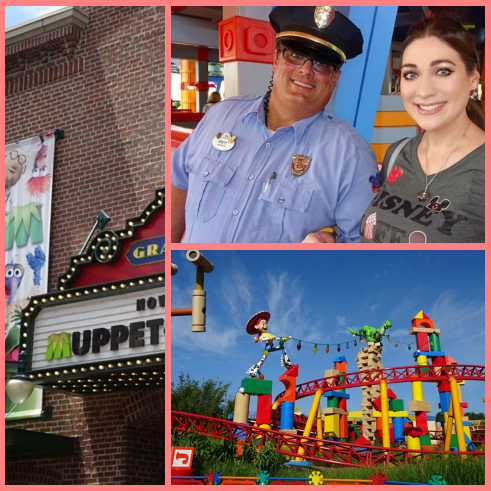 Hollywood Studios is undergoing an awful lot of changes at the moment. In addition to the new skyliners being constructed, Star Wars land is being built and Toy Story land is still fairly new. This was my first time visiting the park since Toy Story land opened....so I was pretty excited. The area is absolutely fantastic. So colourful, perfectly themed, and all around fun. It was everything I hoped it would be. We explored the land quite a bit on this day. In part because I was on the hunt for @guybehindthemagic. It is run by Brett, a Disney cast member and part of the security team for Toy Story land. I have been obsessed with his Instagram account for ages and really wanted to meet him. I'd searched the area several times throughout the day and had all but given up hope. Then my family and I were walking through the line for the Alien Swirling Saucer ride and he happened to walk past. I was so excited. I told him how much I loved his Instagram, where I was from, and basically fangirled a lot. This was absolutely the biggest thrill of the entire vacation for me. 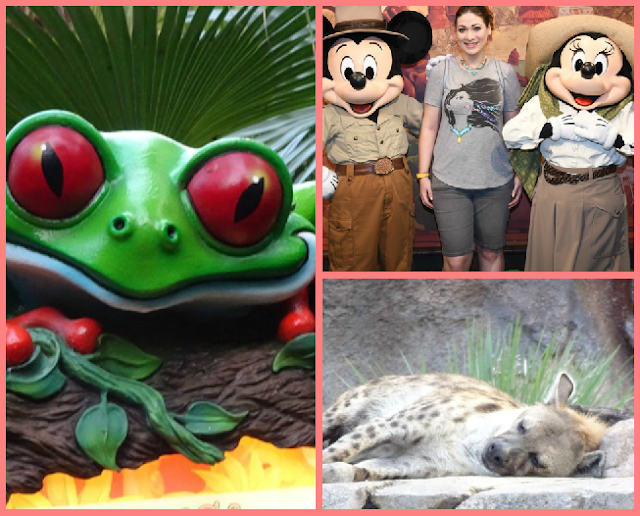 Ahh, Animal Kingdom. Though I absolutely love the park, it seemed we ran into some bad luck both days we visited. It rained the first day and it rained the second as well. Though we were able to get a few things done (a character meeting with Mickey and Minnie, another safari ride, Expedition Everest)...other things were a no go. I was desperate to meet Pocahontas but her character meetings were cancelled due to the weather. Because it absolutely poured. We ended up hiding in a gift shop for an hour and a half, hoping that the weather would pass. It didn't. Eventually, we wound up getting soaked as we ran to Pandora for a fast pass. Though it was a wet day, it was still a fun day. We ended the night with a delicious dinner at Rainforest Cafe. 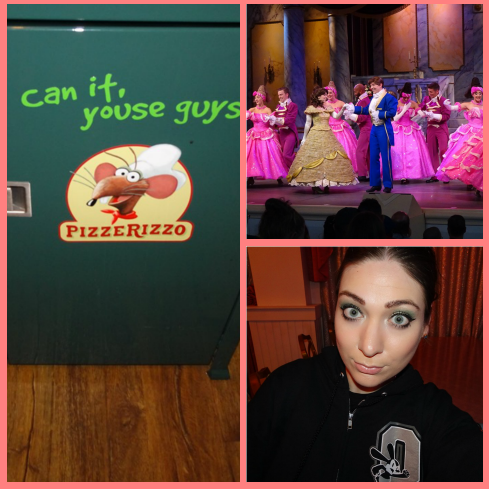 It was another day of rain over at Hollywood Studios. Thankfully, it didn't last the entire day but it was intense. On the plus side, we got to finish off everything from our to do lists. That meant going on lots of rides (including Slinky Dog Dash over at Toy Story Land) and watch the Beauty and the Beast live show. Which is always a favourite! For me, the highlight of the day was visiting my favourite restaurant: Pizzerizzo. Since I have a serious addiction to the Muppets (their Christmas record with John Denver is my all-time favourite holiday album), this Muppet themed pizza place is always a thrill. There are punny jokes, Muppet pictures on the walls, and some seriously great food. This time, we ate in a Muppet wedding reception themed room. I had heard about this before the trip and was determined to eat there. It had a disco ball, classic wedding tunes, sparkly decor, and even a dance floor. I absolutely loved it! 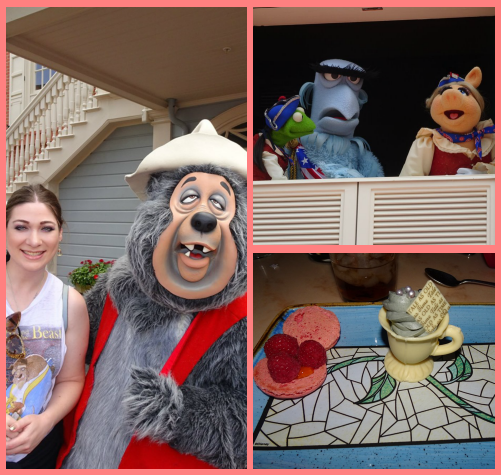 Speaking of The Muppets! Our next day was spent at Magic Kingdom and there was plenty of fun to be had. Highlights included Mickey ice cream bars, fireworks, dinner at the Be Our Guest restaurant, late night shopping, and a river boat ride. That being said, the absolute best part of the day was seeing the Muppets! There is a show that takes place in Liberty Square where the Muppets perform out of the windows. (It is a show loosely based around American history but is mostly all about the Muppets being, well, the Muppets!) I saw this on my last vacation to Disney and it made me so ridiculously happy. It was the same this time. As a Muppet fanatic, there is nothing cooler than seeing actual Muppets. Not Muppets on a TV screen or in a movie....but right there! My sister and I had a blast, dancing, laughing, taking pictures, and basically being overgrown kids. It was perfection. 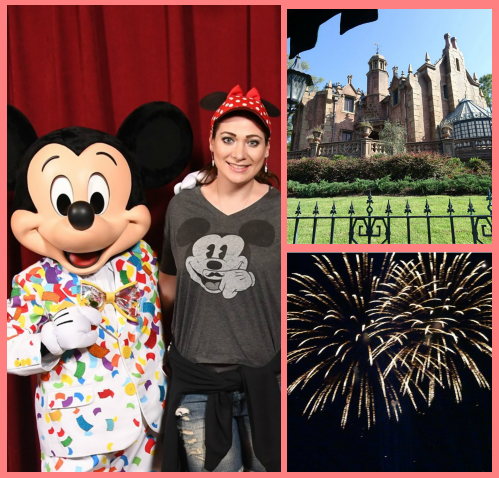 Day Ten: Magic Kingdom and Last Day at the Parks

The last day in the parks is always the hardest. I won't lie...at the end of the night, some tears were shed. It's difficult to leave a place so full of magic, hope, and endless possibilities! That day, I met birthday Micky and Minnie, went on lots of rides, and saw a show in front of the castle. Our final meal was in Liberty Square, right near the Haunted Mansion ride. A highlight of the day was the last ride of the trip: the Tea Cups with my brother. After that, it was time for fireworks. We secured a good viewing spot and enjoyed the show. Then it was time to browse through the shops and pick up last minute items. We were about to leave but then there was a projection show on the castle! It was a nice surprise and I think we all got a little misty eyed as we left the oh-so-special Magic Kingdom. 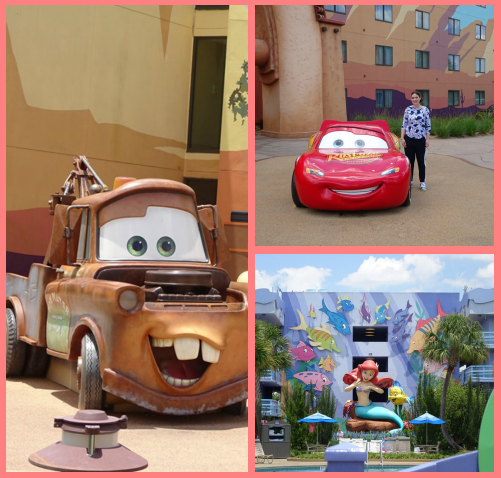 You know what they say: all good things must come to an end. Sadly, it was time for us to leave Disney property and return home. We spent the morning packing everything up, grabbing food, checking out the arcade at the hotel, and touring the Art of Animation hotel property. The place was huge! Even though we had been staying there for the last week and a half....we hadn't actually walked around to see everything. There were massive statues, Cars figures, and a ton of different swimming pools. It took a lot longer than expected to walk around and see everything but it was a fun way to wrap up the trip. Then it was off to the Magical Express bus to take us to the airport. Sigh!

Disney is a truly special place to me. It's where I am happiest and where my childlike sense of wonder can really roam free! Thank you for taking the time to read about my travels over the last few days. It really does mean a lot to me.

Do you have any travel plans this summer? What places are on your bucket list?