my thoughts: i feel pretty 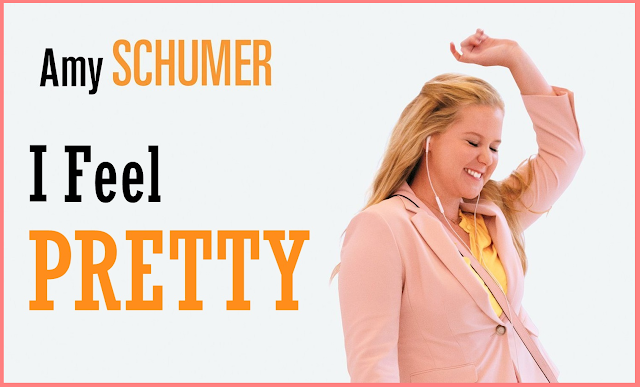 The controversy shocked me. Ever since the trailer for the Amy Schumer movie, "I Feel Pretty" was released, people have been losing their minds. The comment section instantly included variations of the following: How dare she! Amy isn't ugly enough. Amy isn't heavy enough. Amy is too ugly. Amy is too heavy. Why would I need to have brain damage to feel good about myself? Yikes. And these comments were all made before anyone had actually seen the movie. As a fan of Amy Schumer in general, I was eager to see the film, controversy and all.

After watching it, let me start out by saying that the controversy was completely and totally unfounded. Much of the criticism was centered around the main plot point: that someone would need to hit themselves on the head in order to feel confident and beautiful. But guess what....that isn't far off from reality. I have never met a woman who felt totally and completely beautiful. Never. Not even women who would be viewed as drop dead gorgeous by conventional beauty standards. Not even people with "perfect" looking bodies. Not a single one of them felt truly beautiful. Because quite frankly, it doesn't matter how we look. As women, most of us have been raised to feel insecure.

Here's the thing. Society has established billion dollar industries (weight loss, plastic surgery, and yes, even cosmetics) that are designed to make us feel lacking in some way. To want more. To buy more. To spend money on our outer shell instead of nurturing our inner self. I can honestly say that I am affected by this as much as anyone else. So, knowing this, I think much of the controversy surrounding "I Feel Pretty" has to do with the fact that acknowledging the way social norms have destroyed our ability to feel confident and worthy....is uncomfortable.

I get it. It is scary to think about. Unfortunately, much of who we are and how we see ourselves has been shaped by outside forces. That being said, I personally feel that Amy Schumer's movie is a step in the right direction. For starters, it acknowledges the ideals that make us feel less than. And as the film progresses, it takes us into a fantasy world where suddenly, Amy's character feels that anything is possible. Not because she actually looks different but because she carries herself with the confidence to do what scares her, put herself out there, and turn her dreams into a reality. That is beautiful.

Ultimately, "I Feel Pretty" shares an important lesson with its viewers: being beautiful isn't about how you look. It is about what you do, what you say, and how you carry yourself. We learn from the film that confidence truly is the key to success. Whether it takes a fictional bump on the head to realize that or a whole lot of self love....it is achievable.

My advice? Forget about the controversy. If you are interested in seeing a movie that is relatable, funny, and will make you feel good about yourself, "I Feel Pretty" is all you need.

Have you seen the movie? What did you think of it?