dealing with negativity on social media 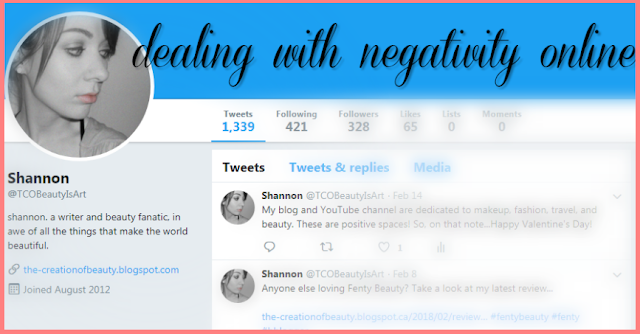 Social media has been weighing me down lately. What started as a fun way to connect to others has become a breeding ground for hatred and self destructive tendencies. Not long ago, I was exposed to the dark side of being a blogger and YouTuber. Sure, I've gotten the odd troll comment, nasty message, or strange remark. It happens. But for the most part, I have been pretty lucky. The large majority of my experiences online have been positive. Until they weren't.

A few weeks ago, I posted an eyeshadow review on my YouTube channel. Because the makeup came from Kuckian Cosmetics (John Kuckian is big on YouTube and has his fair share of fans and haters), it created quite a bit of drama on my super small channel. People who don't follow me and are not subscribed to my channel came out in droves to leave negative comments. Not about my video. About John Kuckian. They sent me messages saying that I was a horrible person for supporting this company. That I should be ashamed of myself. That I was, well....you get the point. The same thing happened on Twitter. I was quite frankly, devastated by the negativity that had started to take over my life. All I'd wanted to do was talk about eyeshadow. And instead, I was harassed. It hurt.

The same day that video went up, I was scrolling through my Instagram feed on my break at work. Suddenly...there it was. A graphic image that promoted self-harm and a caption that was even worse. I spent the rest of the afternoon distraught by what I'd seen. Since I was deeply concerned that other people would see this photo, I reported it right away. Shortly after, I received a response from Instagram: the photo was not considered inappropriate according to their guidelines. Honestly, I couldn't believe it.

In that moment, I lost all faith in social media. When did it go from a form of connection to a place of anger, loneliness, isolation, and destruction? And what does that say about the human race as a whole? I'm not going to sit here and tell you that it is possible to fix other people. Or that social media is terrible. It's not. But it seems to bring out the worst in people....from negativity to jealousy and comparison. Something has got to change! On that note, here are a few suggestions to deal with negativity on social media effectively.


Social media doesn't have to be scary. There are ways to remove the negativity and enjoy all the positive aspects associated with these platforms. Put these suggestions to the test and let the light shine through!

How do you deal with negativity online?