the roar is all around me. a rush of rainbow and mist. 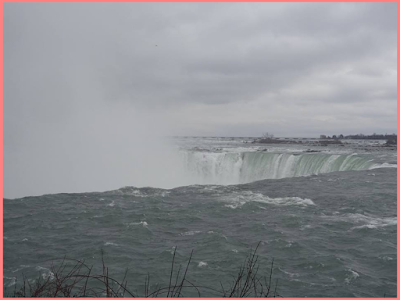 It seems like only yesterday my parents and I visited Niagara Falls. It was a late summer trip. The last before my wedding. Now? My mom and I have just returned from another weekend getaway in Niagara. Normally we would not dream of going in the middle of winter. However, Donny Osmond was scheduled to play a handful of shows at Fallsview Casino. Jumping on the chance to see him again, we bought tickets for two of the three shows.

It was an unforgettable trip. We didn't get to do a lot of sightseeing. It was absolutely freezing. After waiting twenty minutes for a local bus we were shaking like crazy. It was just too cold to do much of anything. Mostly we checked out the hotel, went to a few restaurants, did some shopping at the outlet mall, and of course, saw Donny Osmond. The first concert was fantastic. He put on a great show. It was energetic, fun, and full of incredible stories. He took the time to look back on career highlights and sing some of his best songs. (Including my personal favourite, "Whenever You're In Trouble.")

The trip was going exactly as planned. Until the second show. There was part of the performance where he asked you to write on his Facebook page with your seat number and why you wanted a copy of his latest CD. I already owned it but my mom wanted her own copy and we couldn't manage to track it down anywhere. So I wrote on his Facebook page. Imagine my surprise when Donny Osmond calls out MY name in the middle of the concert. Before I knew what was happening, I was heading towards the stage. Towards Donny.

My whole body was shaking. I thought for a second I might start to cry. Especially as I got closer and closer to him. He asked me where I was from. I couldn't remember. It took me a second to recall. Then he told me that in addition to the CD he was going to give me a backstage pass. To say the moment was surreal would be a total understatement. Even as I write this I am struggling to believe it actually happened. But it did.

I spent the rest of the show shaking and trying to think of what I wanted to say. Once the show was over we dealt with the madness. Trying to figure out where to go. Ignoring the glares of envious Donny fans crammed in front of the doors. (Though to be fair, a few people were very nice and told me to have a great time!) The whole time we waited my heart was beating like crazy. All I could think about was the fact that my hair looked awful. We had been out all day dealing with snow and rain. So I just threw it into a ponytail and reminded myself that Donny would never see my hair. Ha! How wrong that turned out to be. 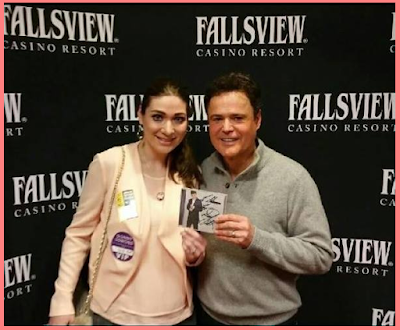 Eventually we were called into the room with Donny. I was shaking so hard. I can't quite remember all of the details. But he asked my name again, where I was from, and if I had Twitter. He asked if we were heading back tonight or staying overnight. I think I said that I love him. And apologized for freaking out. He then said hi to my mom. We took a picture together on my phone - then on his. He asked me to spell my name and Twitter handle. Watching him type that into my phone...to say my name...it was totally surreal. Then he took a picture with me and my mom and we said our goodbyes. It was only five minutes but it was amazing.

Never in a million years did I expect to meet Donny Osmond that night. But it was amazing. That experience took the vacation from fun to downright incredible. I only wish that my mom had been able to talk to him more. I know she would have loved that. Overall? The trip to Niagara Falls was pretty darn special. I am so glad we were able to go.

Email ThisBlogThis!Share to TwitterShare to FacebookShare to Pinterest
Labels: music, other, personal, travel