"Have you seen the new Urban Decay palette?" That was the text my friend sent me a few months back. Though I am typically pretty up-to-date with most of new beauty releases, the Urban Decay Naked Ultraviolet Eyeshadow Palette seemed to have eluded me. Luckily, my friend sent me screenshots of the email she had received from the brand. And there it was. The latest Naked palette in all its glory. The moment I laid eyes on it, I was in awe. The colours looked absolutely gorgeous. Unfortunately, another eyeshadow palette wasn't exactly on my to-buy list. As I have mentioned on here in the last little while, my goal is to use more of what I own instead of always rushing after the latest releases. I decided to live vicariously through my friend, since she was planning to purchase it for herself. Turns out? I wouldn't have to. My mom actually ordered me the palette as an anniversary present. It was such a wonderful surprise. One I have really been appreciating lately. So...if you've been curious about the latest release from Urban Decay, look no further. Here are swatches, a full review of the palette and double-ended brush, and a makeup look using the Urban Decay Naked Ultraviolet eyeshadow palette. 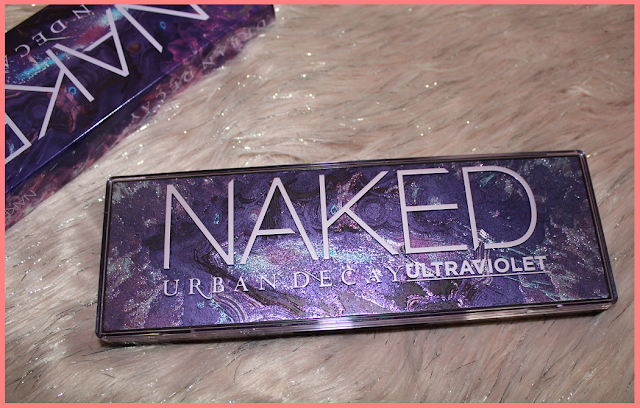 For those familiar with the traditional Urban Decay Naked eyeshadow palettes, the shape and size of the packaging won't come as a surprise. Just the the previously releases, the shadows come in a long rectangular shaped case. Though there are some differences. The original Naked palette had a soft kind of velvet on the case (which you can see here) while the second and third installments had more of a tin kind of case. As for the Naked Ultraviolet palette? It comes in a thick plastic case with an elaborate design on top and raised letters. Just like the previous palettes, there are twelve eyeshadow shades inside along with a double-ended makeup brush. So...how does the packaging fare? Personally, I like this packaging the most out of any of the previously released Naked palettes. It feels a little sturdier and more durable. It is also easier to clean than that original palette! The raised lettering is a nice touch and I absolutely adore that sparkly purple marbled kind of background.

The packaging is simple but effective. It looks gorgeous and it feels sturdy. What more could you need? How about the inclusion of a makeup brush? That is one detail that I really love about the Urban Decay Naked palettes. They leave space in the packaging for that double-ended brush. Not only does this feel like a lovely add on but the brush is really stylish and works so well. With this particular palette, the double-ended brush has a large fluffy side (which I love to use to create a subtle crease or to blend out colours) and a dense pencil brush on the other side (which is perfect to apply colour along the lower lash line). All in all, the packaging is solid, thoughtful, and aesthetically pleasing. 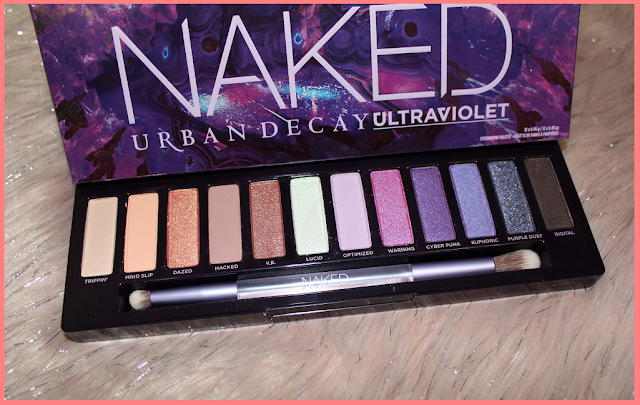 So just what is the Urban Decay Naked Ultraviolet Eyeshadow Palette all about? According to the brand, "our supercharged lineup of 12 intensely pigmented mattes, metallics, and holographic shimmers is a lucid dream come to life." Though previous Naked palettes were more focused on neutrals...this release decided to focus on unexpected colours and even holographic shades. That in itself made the palette stand out from its predecessors. There are twelve shades in all and I tend to mentally divide the palette up in my mind into neutrals and purples. Essentially, there are five warm neutrals on one end, two holographic shades in the centre, and then five purple toned shades to finish it all off. I don't know which side of the palette I prefer....I tend to alternate between the two! One aspect that I really enjoy is the variety of finishes included in this set. There are matters, shimmers, glitters, and holographic shades as well. That gives the Ultraviolet palette an added element of versatility that many releases tend to lack. As for the actual quality of the eyeshadows? Here are swatches from left to right to give you a better idea of how each shadow performs.

As you can see from the swatches above, the pigmentation level is impressive but mixed. There is an awful lot of shimmer happening here but there are also a couple of matte shades to deliver that much needed versatility. Some shades stand out. They include: Mind Slip (a matte peach), Dazed (a coral coloured glitter), Lucid (that incredible holographic shade in the center), Euphoric (that shimmery mid-toned purple), and Digital (a dark warm shade). Then there are a few that fall a little flat. That includes: V.R. (a warm shimmer that lacks in pigmentation) and Cyber Punk (a shimmery purple that fails to pack a real punch). The rest of the shadows fall somewhere in the middle. That being said, there are more shades that wow than not. And I absolutely love the fact that there are holographic shades to wear alone or layer on top. They are so unique! 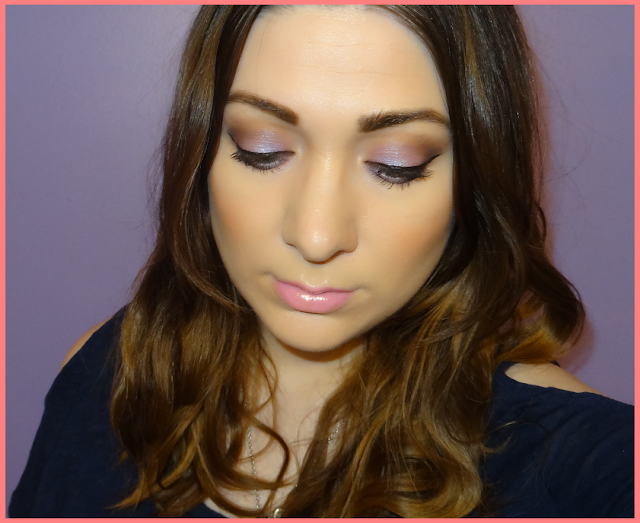 The Urban Decay Naked Ultraviolet Eyeshadow Palette has a lot going for it. In terms of versatility, it checks off a lot of boxes. There are mattes, shimmers, metallics, and holographic shades to choose from. It doesn't end there! This palette also comes with a fantastic double-ended makeup brush and has impressive quality overall. Though there are a few eyeshadow shades that were lackluster...for the most part, these are impressive. For the makeup look above, I used Mind Slip through the crease, Euphoric all over the lid, Digital on the outer corner, and a dash of the purple holographic eyeshadow shade, Warning in the center of the eyelid. The colours worked well to create a warm but colourful makeup look.

Is the new Urban Decay Naked Ultraviolet Eyeshadow Palette worth the splurge? While it may not be an absolute necessity for your makeup collection...it is an eyeshadow palette that has been making me very happy lately. I love the variety of colours and finishes - and of course, the gorgeous holographic shades. There is an awful lot to love here.

Have you tried this palette yet? Are you a fan of Urban Decay?