but now you're gone....i'm just a daydreamer. 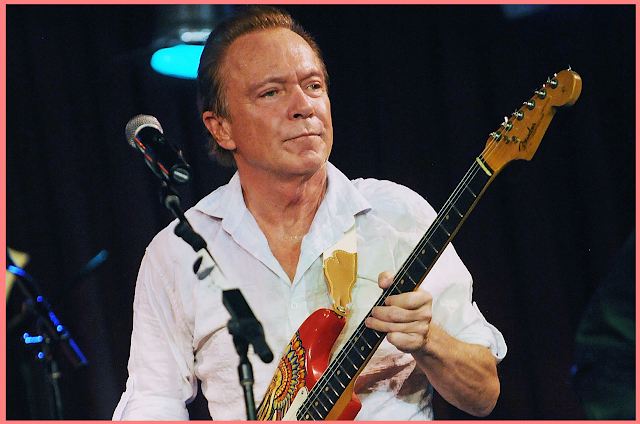 I still remember the first time I laid eyes on him. It was a sleepy Sunday morning and I was flipping through TV channels aimlessly. No one else was awake....so I had the luxury of choosing anything I wanted. There were too many options. Until I landed on a re-run of The Partridge Family, that is. As a fan of 70s television shows, it seemed a logical choice. Plus, I had a vague memory of watching the show with my mom when I was very very young. All was going well and then bam! David Cassidy walked onto the screen. My heart skipped a beat. My breath caught in my throat. By the time he started to sing (in that red velvet jumpsuit), I had fallen, hook line and sinker. Yes, that was the day that I fell in love with a 70s icon.

It has been a wonderful road since then. I have memories of digging through piles and piles of old records, desperately searching for that Bell Records logo in the top corner. Of eBay purchases. Of iTunes downloads. YouTube searches. Online orders. Essentially, I did everything in my power to amass a collection of every David Cassidy recording I could get my greedy little hands on. His husky voice had stolen my heart away....and it remains my comfort today.

Over the last several years, I have had some spectacular David-related memories. A few examples? I wrote a book review on a book inspired by David. And I've seen him in concert six times. The first was ridiculously exciting as I wasn't sure I would ever be able to see him perform live. The second had me camping out in the pouring rain for six hours to get a decent spot....and he pointed at me from the stage during I Think I Love You. So worth it. The next took me to a casino where he rocked out with a guitar like nobody's business. The one after that took me back to that casino, where I was able to watch the concert with my mom (a first).

The following show was admittedly not so great, as he performed with Peter Noone and Mickey Dolenz. I thought it would be the best night ever because my mom, dad, and sister had all come along. Except my mom and sister left before David went on to line up for a Peter Noone autograph. I was definitely not impressed with them that night. But thankfully, there was one more show of his that I was able to attend.

Last summer, it was announced that David was going to play a show in Niagara Falls, ON. I begged my husband to take me and he did. Thank goodness. It was by far the best show of David's I had ever seen. He was so grateful, loving, thankful to the fans, and he even sang a song off of The Higher They Climb The Harder They Fall. I was the only person who screamed when he talked about that record and he made a comment about it. That made my night.

Thinking back on all of these wonderful memories....ones that fill me with so much joy and love....it is hard to make sense of the last few days. On Saturday night (right after I had finished decorating my Christmas tree), it was announced that David had gone into organ failure. I sobbed on the living room floor before falling into a deep depression, where I slept away the rest of the evening. I cried on and off the next few days, while constantly checking for updates on his health. Some were encouraging (like nothing being imminent) and others were not (like his entire family being with him). I didn't know what to think but this flicker of hope refused to go away. He had to be okay. He just had to be.

Then he wasn't. Last night at 9:50pm, I had just shut down my laptop for the night. I'd had a rough day at work (I was inexplicably feeling very ill) and progress on my latest article had been slow. So, I got comfy in my bed and decided to do one last news check before I put my phone away. The headline broke my heart: David Cassidy, Dead at 67. All of those memories. All of those dreams for the future. Gone.

It is taking all of my strength not to fall into the negative. Not to hide underneath the covers forever. Which is why I needed to write this post. Reflecting on the happiness he has brought to my life is helping tremendously. So thank you all for reading this. I appreciate it.


....but now you're gone
I'm just a daydreamer
Walking in the rain
Chasing after rainbows I may never find again.

Rest in Peace, sweet David. I love you.

xo Shannon
Posted by the creation of beauty is art. at 5:14 AM