you're never too old to be young. 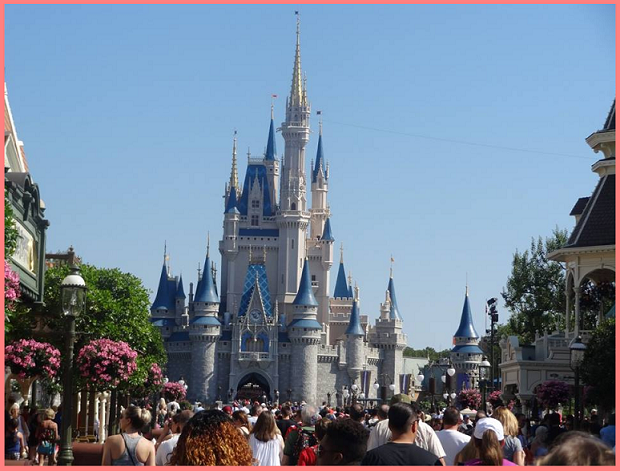 Yes....another Walt Disney World post! This is part two of my vacation recap. The first post was all about our first three days in Orlando. They were spent at Epcot, Hollywood Studios, and Animal Kingdom. Each day was loaded with fun, excitement, and wonder. The kind of experience that you can only have at Disney. (It really is a magical place.) Next? We spent the rest of our vacation at the Magic Kingdom and Hollywood Studios. Here are some of the highlights! 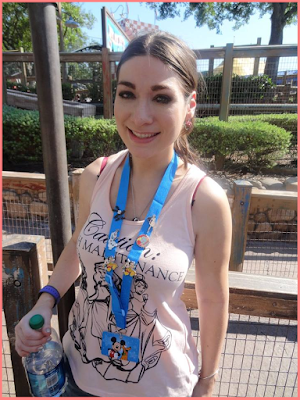 This is the moment that my Disney trip truly felt like a Disney trip. As much as I love all of the other parks (and I do....an awful lot...) there is something about the Magic Kingdom. It just feels like Disney. The music, the atmosphere, the excitement. It is so special. Honestly, if I could just stay there forever, I would be totally content. This day? Was probably the best day I have ever had in Disney. Ever. We were there for a total of thirteen hours and we had a blast. We went on a ton of rides, got a zillion Fast Passes, ate tons of delicious food, went shopping, saw fireworks, and even stayed for the Celebrate The Magic show. It was phenomenal! The whole castle is projected with videos and images from classic Disney movies. My husband and I were in total awe. It was one of the highlights of the entire vacation.

Every moment of the day was special. But one of the best? When my husband chose an Oswald pin for me. Though I have been to Disney parks a handful of times....I have never been a pin collector. But in the welcome bag my mom had sent to us? There was a pin trader starting kit. Oh boy. I went nuts! Suddenly my obsession was all Disney pins all the time. I wound up getting ten by the end of the trip. Oops. Thankfully my husband was super sweet and spoiled me with lots of cute Disney pins. (Some of them can be seen in the picture above.) 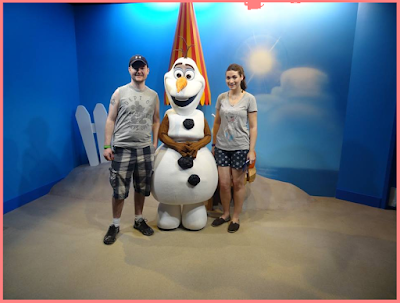 The next day, it was back to Hollywood Studios. This day was kind of bittersweet. Why? It was getting close to the end of our vacation. And our last day in Hollywood Studios. This thought stayed with me for much of the day. I found myself feeling sad....and desperately trying to hold on to every moment. Overall, the day was wonderful. We went there in the early afternoon. Since the day before had been so long we needed a chance to rest and recover. So we had a fantastic breakfast at the hotel before heading out. When we got there? We met Olaf. Okay, so I am a little obsessed with Olaf. And freaked out like a small child while meeting him. Above you can see the picture we got with him! So fun! I love that you can always be a kid in Disney.

After that, there were more rides (I think we went on Rock n Rollercoaster four times), the Beauty and the Beast Live show, dinner at the Sci Fi Diner (you sit in drive in cars under the stars!), and then Fantasmic. The latter was pretty disappointing. Mostly because we had Fast Passes for it. But wound up sitting at the very back. Apparently, having a Fast Pass just meant that you got in. Not that you got a decent seat. What a waste. I was super disappointed because we couldn't see much of anything. Sigh sigh sigh. That was really the only negative thing about our Disney experience. The day ended on a good note, though. We took a bus back to a nearby resort instead of our own. Then had a little adventure walk around Disney. It was fun! 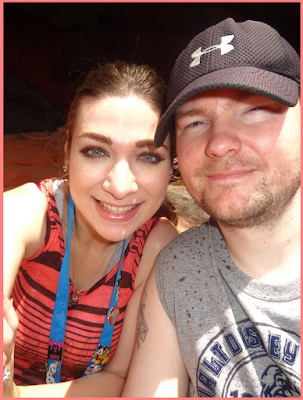 The last day. This was super upsetting for me. I wanted to stay! It felt like the vacation had just started then suddenly it was time to think about going home. Despite this....we had a ton of fun on our last day. We went on a lot of rides, did last minute shopping, and even had a character lunch at the Crystal Palace. Expensive? Yes. But we got to meet Piglet, Tigger, and Eeyore. Very exciting. We spend a lot of time in Fantasy Land this time which was great. That meant Disney Princesses and classic rides. Yes! The best part of the day? When my husband shoo-ed me out of a store. He made me wait outside and then picked out a special Disney pin for me. (It was Minnie Mouse with crystals all over it. So so perfect.)

We went on Space Mountain and Peter Pan and a lot of other amazing rides. It was all rides all the time. Just the way we like it. I started getting upset as the sun went down because I knew that it was all coming to a close. But my husband was sweet and kept cheering me up. How did it all end? We watched the Electrical Parade. It was really awesome. Then we did some shopping on Main Street and went back to the hotel. After that, it was time to pack, try to stay awake, and head to the airport. At 2am. Plus side? I slept the whole way home.

So! That was it. My Walt Disney World trip had come to a close. I wish so much there was a way to go back and do it all again. Because it was incredible, special, and exactly what I needed.